Our son, Mark Warren Wuelfing, was born on February 21, 1999 at Kaiser Permanente Hospital in Walnut Creek, California. We’ll never forget how excited we were to greet our new baby boy. With a two-year-old daughter at home, we had the family we dreamed of. 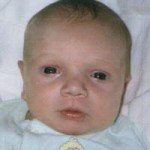 We named our son after his grandfathers, Mark Wuelfing and Warren Carney–two of the greatest men we know. Baby Mark Warren brought the two names together and quickly became the greatest little boy we know. His big sister Madeleine insisted on calling him Markie–and the name stuck.

For five weeks, we enjoyed the normal life of taking care of a newborn and watching Maddie adjust to her new little brother. It was a time of pure joy for our family.

But something wasn’t right. After noticing a twitch in Mark’s movement, we followed up with our pediatrician, who in turn pointed us to a child neurologist. On March 25, Markie was admitted to the hospital, having severe myoclonus, continuous seizures, and an abnormal electroencephologram (EEG).

Despite a zillion tests and consultations, the doctors could not diagnose an underlying cause. Nor could they make Markie better. The neurological disorder was affecting his brain and development significantly. All we could do was make sure he was comfortable. 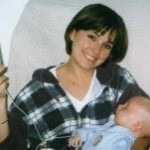 After nine weeks in the hospital, we brought Markie home, with a ton of medication and other medical equipment. Mark was dying, and we wanted him home with us.

We spent the next several weeks taking care of Mark in a way we never imaged. He could no longer drink from a bottle; instead we fed him through a tube. He would stop breathing occassionally; we kept him on a monitor and kept oxygen nearby. We learned that he probably didn’t see, and that his hearing was limited. Unlike most babies, who grow increasingly independent each day, Markie grew more dependent each hour.

Still, we were able to love our baby in a very special way. It was a challenging, yet very peaceful time, and it brought together hundreds of family members, friends, even strangers. It was during this time we realized what a special gift Mark was–and how fortunate we are to be touched by his life.

Mark taught us to love unconditionally. No illness, abnormality, or death would pull us apart. Instead, it brought our family and friends closer. Markie only knew love. 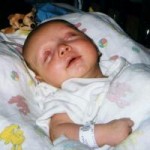 Mark taught us to enjoy each other for who we are. He gave us a new perspective on people, and how special each person in our lives is.

Mark taught us to appreciate life, one day at a time. We learned not to take anything for granted, and that each day on earth is a gift.

Mark taught us to have faith. We prayed and prayed that Mark would get better, and in the end, we believe our prayers were answered.

Mark taught us that we can’t control everything, and that life does not always go according to plan. We gave up trying to make sense of things, and instead make the most of our gift. 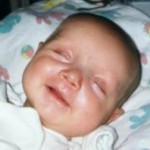 Mark taught us how to be strong. In his four months of life, he endured more than any of us. Yet he never complained. He was brave, and a source of strength for us all.

Finally, Mark taught us how to give–how to give of ourselves to make other lives better. Through Mark, we received an overwhelming amount of love and support, from so many people.

And it’s this gift of giving that inspired The Markie Foundation.
————-
Mark Warren Wuelfing is survived by his parents Janis and Joe; siblings Madeleine, Joey, Emma, Mary Kate, Clare, Caroline, Anthony, and Michael; ; grandparents Yolanda and Warren Carney, and Geri and Mark Wuelfing; and many loving aunts, uncles, cousins and friends. He is forever in our hearts.